For the third consecutive year, Joel Embiid will be representing the Philadelphia 76ers as a starter in the All-Star game.

He is the first Sixer since Allen Iverson from 2000-2006 to be named a starter in the game for at least three consecutive years.

Despite the Kansas product not having the MVP-type season a lot of people expected, he’s still one of the best player’s in the sport who is deserving of this honor.

Plus, his peers and those who cover the sport seem to agree with his standing in the league.

He finished second behind Giannis Antetokounmpo of the Milwaukee Bucks in the player and media rank for frontcourt players in the east.

In addition to the media and the players, the fans put Embiid in the top three. They had him third in their voting behind Giannis and Pascal Siakam of the Toronto Raptors.

He hasn’t played since Jan. 6 after suffering a dislocated finger against the Oklahoma City Thunder. The star center had successful surgery to repair a torn ligament on that left ring ringer on Jan 9.

It’s unclear if he will play in the All-Star Game since the Sixers have yet to provide an update on when he can return to the court.

The game will be held in Chicago on Feb. 16, where he will join fellow Eastern Conference starters Giannis Antetokounmpo, Trae Young, Kemba Walker and Pascal Siakam.

Ben Simmons has a chance to make it as a reserve when the league’s coaches select the rest of the participants. That announcement is next Thursday. 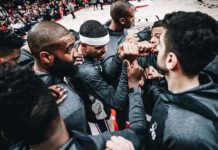 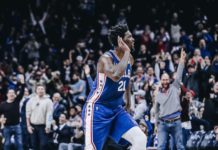