Home NBA Atlantic Don’t give up on the Sixers yet It’s not about how you start; it’s about how you finish. That old sports cliché, which is a go-to reference by coaches and analysts alike, should be how the Philadelphia 76ers approach the rest of the season.

On paper an 8-5 start to a season would be acceptable for most teams in the NBA. After all, the Sixers did add two new starters while letting a lot of offense walk out the door in Jimmy Butler and JJ Redick. But not with this team, especially because of how much they were built up before the season started.

Was it expected the team would hit the ground running from the opening tip of the season and just dominate the 82-game regular season? It shouldn’t have been anyone’s realistic expectation. Despite the slow start, we should be far from declaring this Sixers a failure unable to meet enormously high expectations.

Don’t cancel the season yet

Let’s wait more than 13 games before going back and criticizing the overhaul of the roster this offseason.

Adding a high-level player like Al Horford takes time to integrate into a team, especially one that already has an established center in Joel Embiid. Let’s not forget how hard it would be for someone to replace Reddick’s offensive game and his chemistry with Embiid.

The starting unit of Embiid, Horford, Tobias Harris, Ben Simmons and Josh Richardson have only completed five games together. (I’m not counting the game against the Utah Jazz when Ben Simmons left in the second quarter.) In those games, they are 4-1 with three of those wins coming by double digits.

It’s up to Ben

“For us to win we are going to need him to shoot, but you know I am fine with him playing his game, not forcing anything,” Embiid said. “But hopefully, at some point, I am sure he is going to pick it up.”

When will Simmons come to that realization? Hopefully it comes at some point this season. The Sixers are thrown off by the zone yet again 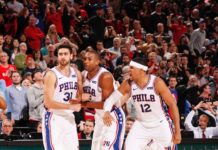