For the first time this season a Philadelphia 76ers home game didn’t conclude with a win. The 108-104 loss to the Miami Heat on Wednesday night ended the perfect 14-0 start to the home schedule.

We all knew the Sixers would eventually lose a game at home, but the way it happened continues to bring to light some of the team’s fundamental problems.

It’s all about the zone

After being outscored 29-19 in the first 12 minutes, the Miami Heat went to a zone defense to start the second quarter.

That decision probably won the game for the Heat, who outscored the Sixers 37-19 in the second to take an eight-point lead into half. Despite a late push from the Sixers, they never gave up the lead in the second half.

Former Heat guard Josh Richardson had some interesting thoughts post-game about how the Sixers need to approach opponent’s zone defense in the future.

“You just got to move the ball, you got to get the ball to the high post, and play inside out, or you just got to drive it,” Richardson said to the media after the loss. “You can’t just stand there with the ball over your head.”

That’s exactly why the Sixers have struggled with the zone defense even behind this game. Don’t forget about the game against the Raptors less than two weeks ago. The Raptors  outscored the Sixers 36-24 in the fourth quarter while playing zone the entire time.

Seven turnovers in the last few minutes of the game made it much more interesting after the Sixers lead by 20 with just under seven minutes remaining. Thankfully the Sixers built up a big lead heading into the final quarter or that would have resulted in another loss.

If the Sixers want to play better against the zone, there’s ways to attack it. Joel Embiid must get more touches in the post, which he eventually got in the fourth quarter. Also, driving to the basket and kicking it out to open shooters would help.

I mentioned earlier the Sixers have fundamental problems that a zone defense can bring out even more than man-to-man defense. Teams will continue to deploy zone defense on the Sixers when Ben Simmons is on the court.

His total lack of desire to even look to take a shot encourages the defense to leave him open on the perimeter. When he goes to the dunker spot close to the basket, there’s several defenders waiting for him.

Perhaps that could be the reason the only time the Sixers had success in the second quarter was when Raul Neto, Furkan Korkmaz, Josh Richardson, Tobias Harris and Joel Embiid were in the court. 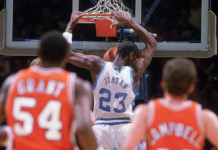