Home NBA Atlantic Ben Simmons is an All-Star, yet again For the second consecutive season, Philadelphia 76ers guard Ben Simmons is headed to the All-Star Game. Simmons was named a reserve for the Eastern Conference by the league’s coaches after just missing out on getting a starting role when the starters were announced last week.

He will join Joel Embiid for the game on Feb. 16 in Chicago.

NBA Twitter isn’t too happy with the selection of Simmons over other deserving candidates including Bradley Beal of the Wizards and Jaylen Brown of the Celtics.

Beal and Brown have had All-Star type seasons but to disparage Simmons’ accomplishments this season in order to make a case for those players isn’t the right way to go about it.

Of course, the obvious argument is Simmons’ inability and reluctance to shoot the ball outside the paint. But believe it or not, shooting isn’t the only factor in determining whether a player is good enough to play alongside the best at the exhibition game.

Leading up the game Thursday in Atlanta, Simmons was averaging 16.3 points, 7.8 rebounds, 8.4 assists, and 2.2 steals per game, leading the league in steals.

It’s important to note Beal is averaging 28.6 points per game and Brown 20.4. However, they are completely different players who bring different skill sets to the table. Scoring means a lot in the NBA, but all aspects of the game need to be factored in as well.

Simmons is averaging more steals, rebounds and assists then both and is the best defender of the group.

Turning it on when at the right time

There’s no doubt his numbers, along with his play this season, are impressive and worthy of a spot on the team. But even more impressive is how he stepped up when they needed him the most.

When Joel Embiid missed nine games due to a torn ligament in his left ring finger, it was Simmons time to carry the extra workload. He did that and then some.

Over those nine games, the two-time all-star averaged 21.5 points, 9.3 rebounds, 7.8 assists, and 2.3 steals. The Sixers went 6-3 in those games with wins against the Boston Celtics and Los Angeles Lakers.

“To me, it is one of the hand-scratching no-brainers that he is a clear NBA All-Star,” head coach Brett Brown said regarding Simmons. “If we would have a better record, he could have been named a starter.”

Becoming a starter at the All-Star Game should certainly be in his future. January was just the start for Cam Reddish 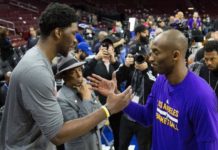 Kobe will always hold a special place in Philly Don’t get in Ben Simmons’ way