The NFL’s 2019 win totals were released earlier this month at various online sportsbooks and, according to the comprehensive tracker at sportsbettingdime.com, there are four teams whose 2019 projections are at least three wins better than their 2018 record.

They are, in alphabetical order …

A couple of these teams share the same reasons for optimism. The 49ers should get a full season from QB Jimmy Garoppolo, who only managed 2.5 games last year before a knee injury put an end to his campaign.

Likewise, the Jaguars are expected to have competent quarterback play thanks to swapping the millstone that was Blake Bortles for Super Bowl 52 hero Nick Foles.

The biggest change for the Packers was the replacement of longtime head coach Mike McCarthy with young offensive-focused Matt LaFleur, who’s expected to get more from future Hall-of-Famer Aaron Rodgers.

And the Jets, well, the defense has a lot of new names — like CJ Mosley and first-round pick Quinnen Williams — plus Sam Darnold should be better in year two; but the biggest addition is 27-year-old running back Le’Veon Bell. The odds taken from SBD suggest they are the only ones who could potentially pressure the defending Super Bowl champs for the AFC East and that is still a huge longshot.

Back in 2018, the preseason win totals also featured four teams who were predicted to have at least three more wins than the year before.

As you can see, two of these teams – the Browns and Texans – wound up exceeding their win totals, while the Packers and Giants fell well short.

Last season, the Browns, Packers, and Texans were effectively in the “we have a new QB compared to last season” boat, whether through injury or offseason acquisitions. The Giants, on the other hand, were more like this year’s Jets: their biggest new piece was a running back in the form of 2nd-overall pick Saquon Barkley.

Barkley certainly did his part and the Giants’ offense was much improved, moving from 23rd to 13th in Offensive DVOA, according to FootballOutsiders. That said, there is only so much value a running back, even a running back as dynamic as Barkley, can provide. When an NFL roster is as replete with holes as the Giants was, highlight-reel 50-yard TD runs will be solitary bright spots in a long season.

The 2018 Jets had the worst offensive line in the league in terms of run-blocking efficiency. The 2019 unit isn’t going to be much better. It was better in pass protection, but still only 18th among the 32 teams. Asking Sam Darold to take a big leap behind this line, and with a lackluster receiving corps, is a big, unreasonable ask.

Unless the Jets’ defense puts together all its new puzzle pieces seamlessly from Week 1, it’s going to be extremely difficult for this team to go from 4-12 to 8-8. Their 2018 point differential (-108) was the fourth-worst in the NFL. From 2017 to 2018, the Giants improved their point difference by a full 99 points and still only improved by two wins. 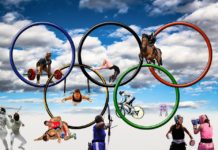 6 Sites Every Sports Enthusiast Should Know Why No Deposit Casinos Are Popular in the US Would a singles return put undue pressure on Andy Murray?