Since coming into the league as a third-round pick in 2015, Tevin Coleman has been one of the best situational backs in the league for the Atlanta Falcons. The problem for Coleman came from his inability to unseat Devonta Freeman as the go-to option in the running game. The four-year pro has failed to log more than 167 carries or 32 receptions in a single season but hopes to be more of a focal point with the 49ers.

Coleman, although used sparingly, made the most of his opportunities as he averaged 4.4 yards per carry (YPC) and 11 yards per reception (YPR) in 56 career games. The most impressive stat, though, is the 29 touchdowns he’s recorded in his career. Coleman is among an elite group of skill position players to score eight or more touchdowns from scrimmage over the past seasons, joining Melvin Gordon, Antonio Brown, Ezekiel Elliot and Davante Adams.

Tevin Coleman's highest-graded season came in 2016 when #49ers head coach Kyle Shanahan was the offensive coordinator of the @PFF_Falcons.

Like in Atlanta, Coleman will again battle for the lead back role, but this time it will be a three-back competition. Jerick McKinnon, who had a similar role in Minnesota as Coleman in Atlanta before signing with the 49ers last offseason, is coming off an ACL injury he suffered in the preseason last year to go along with 2018 starter Matt Breida. With three more than viable starting options, this is one of the most competitive backfield competitions in the league.

When it comes to fantasy outlook, Coleman should be drafted the highest among the three. Given his familiarity with Shanahan’s system, as well as the combination of skill and health advantage over the other two options, Coleman has a chance to start out of the gate. Also, given the severe lack of receiving options, Coleman’s experience, albeit small, lining up on the outside will allow him more opportunities on the field.

Tevin Colman was the winner from our poll yesterday of who #49ers fans think will get the most yards from scrimmage in 2018. So here's a bonus stat for you:

Coleman has gone over 1,000 yards from scrimmage in the past three seasons.

The 49ers have a middle-of-the-road offensive line, with the strong points being the tackle positions. Veteran Joe Staley and rookie Mike McGlinchey performed well last season as they earned Pro Football Focus overall grades of 82.2 and 73.2 respectively. The problem comes on the interior, but Coleman’s strength during his time with the Falcons was when he was on the outside running stretch plays to get onto the perimeter, and that’s where Coleman will need to put up the big numbers.

Heading into the season, I don’t see any of these backs (Coleman, Mckinnon or Breida) being strong enough options to warrant an RB2 spot, but in PPR leagues Coleman and Mckinnon are flex options. 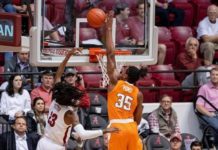