With the NFL preseason started, there are just four short weeks before kickoff of the regular season. Most fantasy football drafts will take place in the coming weeks and beyond the easy choices in the first rounds, there are players you should avoid and keep an eye out for in the later rounds.

You don’t win a league in the first round, but you can lose it then. In the mid-to-late rounds though, is where you can win a league. So which wide receivers and tight ends should you avoid so you don’t lose it and guys you should target that could lead you to victory?

Bust: A player that will perform at least a level lower than their drafted position this season.

Sleeper: A player who is drafted in later rounds that could be a solid starting-caliber option.

Breakout: A mid-late round option that will make the leap into a top 10 option for the position this season.

The Cleveland Browns were the talk of the offseason as they made major moves all along with the offense and defense, but there’s only one football to go around. Last year, Jarvis Landry reaped the benefits of an offense with minimal proven receiving options as he racked up 149 targets while the second highest was tight end David Njoku with 88. With an influx of more offensive weapons, most notably All-Pro wide receiver Odell Beckham Jr., I expect that number to surely come down drastically. Beckham Jr. has averaged around 10 targets per game since coming into the league and should garner similar numbers with an upgrade at the quarterback position.

Part of the reason I also think Landry will be a bust is based on what we’ve seen from him in new head coach Freddie Kitchens’ system. Since Kitchens took over in week nine, Landry saw a decrease in his targets as he averaged 11.8 before the switch and just 6.9 after. In weeks 1-8, Landry had just two games with four or fewer catches, but in weeks 9-17 he had five of them.

Landry has proven to be one of the best receivers in the league since being drafted, but this is the first time he isn’t the definitive number one option since his rookie season. With Beckham Jr., David Njoku, Kareem Hunt, Nick Chubb, and Duke Johnson Jr. hungry for opportunities, this offense just seems to have too many mouths to feed for Landry to reach his 90-catch, 1,000-yard season he’s accustomed to.

Josh Rosen seemed to be all the talk when it came to the Arizona Cardinals last season, as a rookie quarterback should be. But the Cardinals second-round pick, Christian Kirk was completely overlooked during his rookie campaign. The versatile wide receiver out of Texas A&M put up a solid first-year fantasy performance as he averaged 10.3 points per game. He also emerged as the second option as he ranked second on the team in receiving yards, trailing only Larry Fitzgerald, tied for second in touchdowns and third in catches.

Although Kirk only recorded a 13.8% target share in 2018, that also took into account the four games he missed. The key is that when Kirk was thrown the ball, he caught it as he secured 65.3% of his targets, which was higher than Odell Beckham Jr., Mike Evans and Antonio Brown.

His quarterback and coach are changing this season, but I believe it will be for the better. Early reports, according to MMQB’s Albert Breer, are that Kirk “has been the best receiver on the roster”, on an explosive roster that should be in quite a few shootouts is a recipe for a solid fantasy football season. Kirk could severely outplay his 11th round average draft position and be a potential high-end WR2 this season.

Chris Godwin has enjoyed two solid seasons since being drafted in the third round out of Penn State. Godwin improved across the board as he increased his catches from 34 to 59, yards from 525 to 842 and touchdowns from one to seven. He was able to do so, despite starting just five games and third on the depth chart behind Mike Evans and DeSean Jackson for the outside receiver positions. Now, Jackson was traded to the Philadelphia Eagles and Godwin has a clear path to taking over the reins opposite Evans in an explosive offense. Over the last two seasons, DeSean Jackson has missed six games and in those games, Chris Godwin has averaged 12.5 PPR fantasy points.

Chris Godwin broke out with a career year in his sophomore season pic.twitter.com/BTPN3fix65
— PFF (@PFF) February 12, 2019

The Buccaneers also changed coaches bringing in previously retired Bruce Arians to take over for Dirk Koetter. Arians is known for looking to air the ball out in his offenses, something Godwin does very well. Amongst receivers with at least 50 catches last season, Godwin ranked 10th in yards per reception at just over 14 yards a catch and he’ll be across from the guy who ranked first in that category.

This should be a high scoring offense with a defense that should be in the bottom 10 of the league, which means a lot of passing and a lot of opportunities for Godwin. I expect this to be a three-headed attack of Evans, Godwin and tight end O.J. Howard with most of the attention going to Evans and Howard, which should leave Godwin in a bunch of favorable situations. There’s no doubt in my mind he can be a high-end WR2 on a championship-winning team this season if the first two years of his career are any indication of his ability.

After a subpar four years in Detroit, Eric Ebron made the most of his first season in Indianapolis as he earned his first pro bowl nomination. Ebron ended up finishing as TE4 with 156 points, almost doubling his next highest total of 83, but I see a regression coming for this upcoming season.

For much of the season, Ebron was able to dominate the tight end looks with Jack Doyle nursing a hip injury and a lacerated kidney. In the two seasons before last, Doyle was a safety blanket for Andrew Luck that would be looked at early and often in plays. Ebron will continue to put up starting-caliber tight end numbers because of his knack for getting open in the end zone (13 touchdowns in 2018) in an offense that lacks the combination of size and athleticism that he possesses. The problem comes with his snap count as he was limited to 45,26,21,38 and 40 percent of the team’s snaps when Doyle played last season.

His end of the seventh round ADP is a little too high for me. He’s ahead of options like Alshon Jeffery, Tyler Boyd and James White with other tight end options available. So, with a bunch of new additions to the offense and just one season of proven production I’m wary of taking him at that spot. This is a deep position and there are other options with better situations that you can take later in the draft instead of missing out on starting options at other positions.

There’s not that much optimism around pass-catchers in Baltimore for Lamar Jackson‘s second season, but tight end Mark Andrews might be the lone bright spot. Andrews had a strong rookie campaign with 34 catches for 552 yards and three touchdowns, ranking fifth, fourth and third respectively on the team. That was all while ranking sixth in snaps amongst skill position players and second amongst tight ends by 237 plays (Nick Boyle).

Boyle has proven to be more of a blocking option (no more than 37 targets, 28 receptions and 213 yards in four-year career) and the Ravens run two tight end personnel in the top five in the league from when Lamar Jackson took over starting quarterback duties in week 10. There’s also the absence of proven pass catchers on the roster with Willie Snead IV, whose never recording more than 72 catches, 895 yards and four touchdowns, leading the squad lining up opposite rookie Marquise Brown.

Mark Andrews could be in line for a more featured role this season, and for good reason! pic.twitter.com/7mUaoolf8h
— PFF (@PFF) July 10, 2019

Andrews is in a good spot as he appears to have a good rapport with Jackson and with defenses game planning to stop the heavy run attack, he has the chance to be the reliable security blanket that Jackson leans on. According to The Athletic’s Jeff Zrebiec, Andrews has been the Ravens’ “most dangerous and productive offensive player” at training camp. Andrews is being drafted in the 14th round according to Yahoo, which is lower than retired tight end Rob Gronkowski. I’m not kidding, Rob Gronkowski is being picked ahead of Mark Andrews. Andrews is well worth a look in the last few rounds with the potential to be a diamond in the rough for minimal risk.

The Pittsburgh Steelers offense will take the field this year for the first time 2011 without All-Pro wide receiver Antonio Brown. Brown’s been a huge part of the offense as he’s recorded at least 154 targets and 101 catches every year since 2013. With those looks up for grabs, I expect Juju Smith-Schuster to reap the benefits, but I also see tight end Vance McDonald taking a step.

McDonald was third on the team in targets despite playing just 50.54% of the offensive snaps. With looks up for grabs in the wake of Brown’s departure and no other proven tight end option, McDonald will have every chance to produce on a team with limited receiving options outside of Smith-Schuster. McDonald is going in the 11th round on Yahoo as the 10th tight end taken (the same spot he finished in at the position last season) which could be one of the bargains of the season. 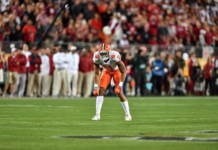