The Los Angeles Clippers hosted the Utah Jazz in Game five of their best of seven series. Tied at two games a piece, the Jazz looked to overcome the favorites, while the Clippers seemed to defend their home. The Jazz won game five 96-92 behind Gordon Hayward‘s 27 points.

When Hayward left game four early with an illness, the Jazz seemed all but done. Along with Rudy Gobert recovering from a knee injury, the Jazz became even bigger underdogs. That was until Clippers star Blake Griffin was ruled out for the series with a toe injury.

Contribution from either teams’ role players will play a huge role in closing out this series. There have inconsistencies on both sides so far. This series has been keen on role players.

The first quarter was played hesitant on both sides and even at one point play got slightly sloppy. After a quarter went by, and an 11-point first quarter for Hayward, the Clippers led 21-19.

Early in the second is when the Jazz’s bench started to play their part. Big plays from Rodney Hood, who had 7 in the quarter, and Joe Johnson, who had 4 in the quarter helped push it along. At the end of the first half, the Jazz led 46-43.

In the third quarter, Joe Johnson maintained his good play by scoring a team-high five points in the quarter, tied with Boris Diaw. The Clippers were kept alive with Chris Paul and J.J. Redick’s relentless play. Los Angeles still trailed Utah 64-58 after three.

The fourth quarter was by far the best quarter of basketball in this game. The teams went back and forth including Rodney Hood’s nine fourth quarter points and J.J. Redick’s 14. However, it wasn’t enough to defeat Utah as George Hill hit two free throws to ice the game and the Jazz went on to win the game 96-92 and take a 3-2 series lead.

Some notable performances for the Jazz were Rodney Hood, who had 16 points and five rebounds. Joe Johnson poured in 14 points and eight rebounds, and Rudy Gobert had 11 points and 11 rebounds. For the Clippers, Chris Paul had 28 points and nine assists while J.J. Redick had 26 points and DeAndre Jordan scored 14 points and grabbed 12 rebounds.

These two teams will head to Utah as the Jazz will look to advance to the conference semifinals for the first time in seven years. It won’t be easy as it takes on the unstoppable clutch play of J.J. Redick and Chris Paul. If the Raptors ain’t broke, don’t fix it 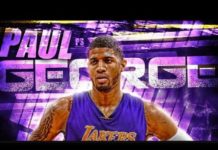 A look into the future: What the Lakers may do at the trade deadline Brandon Ingram will be a dangerous man… if he can shoot