The minor league talent is promising for Cincinnati, and it should only continue to get better.

*Note: 2017 Draft selections will be excluded due to lack of time in the minors.

Some of these prospects will get there sooner than others. A few will get traded or never make it. One or two will probably become all-stars.

This article will take a look at how the top 10 prospects in the Reds system are doing this season. The rankings and stats are based on the prospects list and numbers from MLB.com.

Amir Garrett and Robert Stephenson have graduated from the farm system, so they cannot be included.

Senzel started the season in High-A Daytona and recently earned a promotion to AA Pensacola. He hasn’t disappointed in his first full year of professional ball, posting a .304/.374/.465 with an OPS of .839.

MLB.com went so far as to suggest he may be the first bat from his class to get the call. Senzel has been impressive so far in his promotion, with his batting average only dropping .005 from high A, while his OBP has risen 0.020 from high A.

Don’t be surprised to see him in the majors sooner rather than later.

Winker started the year in AAA with hopes of making it to the majors at some point. He got the call and didn’t disappoint while in Cincinnati. He hit .273 in four games while in the big leagues.

His ability as a hitter is possibly the best in the Reds farm system, and that could have him playing regularly in the majors by next season.

Trammell is ways away from being a big-leaguer. He is still only 19 years old and will not turn 20 until mid-September, but he oozes potential. Trammell has elite speed and, though he is not Billy Hamilton level (no one is), has 23 SB and eight triples so far this season.

Trammell has an encouraging .349 OBP despite striking out 76 times in 75 games. If he can cut down on those, Trammell could be a terror at the plate with his speed.

Look for him to be promoted to High-A before the end of the season.

Aquino has an elite level arm and above-average range in the outfield, making defense his calling card. He’ll never be a great hitter, but solid power should contribute to making up for his below average ability to make contact.

Aquino also boasts above average speed that resulted in six stolen bases this season. He and Winker are both corner outfielders who could be full-time big leaguers by next season, but they are almost opposite players.

Aquino could be moved in a trade for the right player, but he could be on the 40-man roster come September.

Castillo made the majors earlier than expected but he’s performed admirably since getting the call. In three starts, he has a 4.41 ERA and 22 Ks in 16.1 IP despite possibly being rushed to the majors.

In 14 starts and 80.1 IP in Pensacola, he posted a 2.58 ERA and 81 Ks while only walking 13. His secondary offerings still need work, but his control and fastball have him setup for future success.

Castillo should be a regular starter by next season at the latest, should the Reds decide to send him back down at some point.

Stephenson projects to be a do-it-all catcher at the big league level who can do a little bit of everything. He is above average is everything, but not great at any one thing. This is showing in Dayton, with him posting a slash line of .268/.361/.405.

Should Mesoraco or Barnhart not last in Cincinnati, look for Stephenson to move quickly through the system.

Romano may have a 1-3 record in AAA, but don’t let that fool you, he’s ready to be an MLB pitcher. His 3.06 ERA suggests he may be unlucky when it comes to his record. He’s not a strikeout artist, but his above average control helps make up for what he lacks in power.

He only has 28 Ks in 47 IPs, but he has also only walked 14 batters in that same span. He had trouble in his only major league start, giving up two runs in three innings. However, he is still good enough to be there.

Romano should be in the big leagues full-time next season, barring a drastic change.

Mahle started out the year in AA and impressed the Reds so much he got bumped to AAA. He’s impressed so much there, so people want him in the majors now. While the may be premature, in AA, Mahle posted a 1.59 ERA in 14 starts. He struck out 87 in 85.0 IP while only walking 17.

In AAA, Mahle has only given up three runs in 13.0 IP between his two starts. He has gotten 15 Ks in that time and only walked two batters. Mahle has an above average, four-pitch arsenal with excellent control.

Mahle should have made his debut by the end of next season and should be in the rotation full-time by Opening Day 2019.

Rodriguez projects to be an above-average-to-great defensive shortstop with a bat just good enough to earn him a regular role in the majors. Rodriguez is projected to have very good or great range, throwing power, and speed.

He’s only batting .253 at the High-A level, and his .294 OBP and .292 SLG percentages don’t help matters. However, his defense should be enough to keep him moving through the farm system.

With SS filled in the majors, it could be a little bit before he gets to Cincinnati, but he certainly has the potential to get there.

Gutierrez projects to be more of a reliever at the big league level, but for now, the Reds are developing him as a starter. His fastball/curveball combo is deadly, which is why he projects as a reliever, but his command and other offerings need work.

He has a 5-6 record with a 4.68 ERA in High-A this season, but he has 80 Ks in 75.0 IP. Gutierrez has also only walked 16 batters, suggesting with some more work he may develop into a quality starter.

It isn’t likely he’ll begin as a starting pitcher with Cincinnati, but he could be valuable as a reliever with the ability to spot start every once in a while. 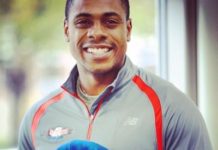