NEXT OPPONENT: at Denver Broncos

NEXT OPPONENT: vs. Green Bay Packers

It seems like the obvious pick, due to his success this year. The Chargers right now live and die by their quarterback. Other than Rivers, their two biggest play makers, RB Melvin Gordon and WR Travis Benjamin, have been good but not great. Gordon is only averaging 3.4 yards per carry so far this year, and looks to improve on that mark against an injured and young Falcons defense. Benjamin meanwhile has big play ability, but he’s only found the end zone twice this season. The player to watch is the man under center. Rivers has been efficient this season completing just over 67% of his passes (3% higher than his career average). Most impressively, he is taking care of the football. This year Rivers has thrown 12 touchdowns to only 3 interceptions-two fewer interceptions than at this point last season. Look for Rivers to take advantage of Atlanta’s zone defense, and to pick on the pass interference-prone Robert Alford in the Falcons’ secondary.

Look for Tevin Coleman to get back on track at home against the Chargers, but not in the run game. Atlanta will utilize Coleman’s ability to catch the ball out of the backfield to exploit San Diego’s 26th ranked pass defense. Coleman is a mismatch for most teams in the league, and the Chargers are no exception, giving up nearly 1,700 yards through 6 games this season. With Julio Jones likely drawing double coverage most of the afternoon, keep an eye out for Coleman’s elusiveness and break-away speed to wreak havoc on San Diego’s slower linebackers in the flat and in the seam. Don’t expect a tremendous day rushing the ball from Coleman against the Chargers’ 6th ranked rush defense, especially since he continues to split carries with an equally dynamic Devonta Freeman, who currently leads Atlanta in rushing. Expect Tevin Coleman to make his mark through the air in a big way on Sunday.

Rivers may have found his new favorite target last week in the form of rookie TE Hunter Henry who caught 6 balls for 83 yard and a TD. Henry might just be the other player to watch as the Falcons have struggled to cover the TE position all season.

Melvin Gordon is coming off of a good performance last week rushing for 97 yards on 27 carries. Expect him to shoulder a heavy load this week as his 6 TDs are the second most among all running backs in the league so far this season.

Tyrell Williams could be the wild-card here. He has the same number of touchdowns (2) as #1 target Travis Benjamin, and nearly equal the receiving yards at 386. These should be a formidable pair against a Falcons secondary that has yet to prove itself this season.

Everyone expects a shoot out in this one. The Falcons come in leading the league scoring an average of 33.2 PPG. The Chargers are third best at 28.8 PPG. Given the average play by both teams’ defenses, it should come as no surprise when each squad continues to score points in bunches in the Georgia Dome.

San Diego also looks to gain their first road win of the season (0-3). To do so, they’re going to need to establish the run with RB Melvin Gordon, and hope he adds to his 6 TD season total. Also, the Chargers feel they have found a replacement for the ailing future HOF TE Antonio Gates. Hunter Henry should see his fair share of targets across the middle to test the Falcons’ youth at linebacker. Defensively, DE Joey Bosa has been strong at the point of attack. Despite his late arrival, he has shown the potential to make big plays on the line. Bosa will have to make Ryan uncomfortable in the pocket if the Chargers hope to escape Atlanta with the win.

The formula for the Falcons has not changed, nor should it. Right now, they mix tempo between huddle and hurry-up better than any team in the league. WR Julio Jones should garner double coverage most of the evening causing mismatches all over the field. If QB Matt Ryan can continue to find the open receiver, the Falcons shouldn’t have much trouble moving the ball. The real question for this squad is whether or not they will be able to re-establish the run with Freeman and Coleman. Expect the Falcons’ offensive line to play with a chip on their shoulder this week, after last Sunday’s poor rushing output.

Neither of these teams have lost by way of blow out; the same should hold true for this one. Every loss for both teams has been by single digits, so expect this to be a close contest.

“To be, or not to be” seems a fitting tagline for this clash of high scoring offenses. On Sunday, the Atlanta Falcons want “to be” a playoff contender, maintain their standing as the best offense in the league, and avoid last season’s tailspin into mediocrity. As for the Chargers, they seek “to be” in the race for their division-sitting only two games back of division leader Oakland. A loss for either team and successful season aspirations may very well turn out “not to be”.

Jacob Tamme, Austin Hooper, and now Levine Toilolo have all caught at least one touchdown pass from Matt Ryan this season, so there’s no telling which one will step up on Sunday. Keep an eye on Hooper as he has been perfect with six receptions on six targets this season.

Matt Ryan is off to the best statistical season of his career. I don’t expect anything different at home against the Chargers’ below average pass defense.

Vic Beasley will need to be more consistent pressuring to the quarterback as he was unable to chase down Russ Wilson last week. The Falcons were hopeful that Beasley had “turned the corner” following a career-high 3.5 sack performance the previous week at Denver. The jury is still out. 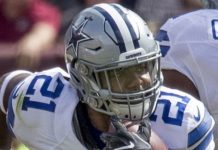