Western teams are moving on up in this week’s Overwatch League power rankings. After a fantastic week of top-tier play, we will see how many of the teams can hold onto their rankings.

This just can’t be a surprise to anyone at this point. Yes, they lost their first match since the first week of Stage 2. Still, they find ways to win. After losing to the Boston Uprising in an extremely close match, the NYXL could have fallen into a skid to the ever-dangerous Houston Outlaws. Instead, the NYXL finished off Game 5 on Oasis to secure the win.

The NYXL will likely rebound and go back to their upward trajectory. While Boston beat them once, they would not be able to consistently down the giant at the top of the standings.

Do-Hyeon “Pine” Kim came back into the lineup, as well, and has shown how important a specialist depth player can really be.

Philadelphia just finds a way to win. First, they finished off the Outlaws in a five-game match with two of those maps going to extra points. Next, they shut down the London Spitfire’s attempt at a reverse sweep.

Was either win pretty? No, but the standings don’t care. The Fusion, especially with Josue “Eqo” Corona back in the lineup, are the second-best team in the Overwatch League.

The Valiant have been one of the bigger surprises in Stage 3. While they have been a decent team, they were inconsistent in Stage 2. On top of that, the team went through quite a bit of change between trades, players turning 18, other acquisitions and cuts.

The Valiant took it in stride. They’re 4-0 with a map score of 14-1 for a differential of +13. While three of those wins come against teams in the bottom third of this week’s power rankings, it’s still impressive. Los Angeles, green edition, is in a great place to push for a Stage 3 Playoff spot.

This is the first time in a long time that London has fallen out of the top three. The Spitfire have had a rough Stage 3 and that’s being nice. They’re sitting at 1-3, and while two of those losses came in five-game matches, opposing teams have revealed glaring holes in their current structure.

London has a chance to right the ship, but it will be incredibly difficult. They play both the Boston Uprising and the Los Angeles Valiant next week in matches that are guaranteed to affect both these rankings and the Stage standings.

I’m still not sold on Boston. With Jonathan “DreamKazper” Sanchez, Boston would probably be a top three team. While they arguably still could be with Stanislav “Mistakes” Danilov starting at the DPS slot, they will need more than a week to prove they have somehow performed the feat of addition through subtraction.

WHAT a way to cancel the Deadeye! @MistakesOW #OWL2018

As it stands, Boston has yet to lose. They’ve beaten both the number one and the number two team on this list. They rolled over Houston and canceled a reverse sweep from the hands of the Mayhem. The Uprising have the winning pedigree to be higher on this list, but it’ll probably take one more week for them to climb. They do have a difficult week with both the Seoul Dynasty and the London Spitfire on the docket.

The Gladiators sitting right at the halfway point of the league power rankings just feels right. Los Angeles Purple is a team that can pull a win out of almost nowhere against any team in the league, but they can’t seem to do it consistently enough to force their way up this list.

It is still early enough in the stage where they can push for a stage playoff spot, but they have to be looking towards the finish line to ensure themselves a place in the Season 1 Playoffs. They have all the talent to put everything together, they just need to do it consistently.

Seoul needs work. They’re 2-2 with a map differential of 0. Is that bad? Maybe not for the Florida Mayhem, but for a team who was fully expected to win the Season 1 Championships and everything else along the way, being stuck in neutral is unacceptable.

Korean fans have openly called for the coaches to answer for their seemingly odd calls while the team itself has, frankly, performed poorly.

The Dynasty need something to kick them into high gear and reset their mentality. Sadly, they can’t bring in another player to jump-start the team. If they need a new person to do it, they’ll need to bring in a new coach of some kind.

If the ship doesn’t right itself after Week 3 with matches against Shanghai and Boston, the Dynasty will need to look into something.

Yes, the Outlaws are 1-3 in Stage 3. Yes, that will make it difficult for them to push for the Stage 3 Playoffs. Still, don’t give up on the team quite yet. Their three losses come against three of the top four teams in these rankings, and when they played Boston, they still had DreamKazper. Their matches against the NYXL and Philadelphia were extremely close five-game matches.

One of the major things that can hamstring the team going forward is their poor play on Route 66. The team needs to get this map under control if they want to see any sort of sustained success.

A major plus for the Outlaws was the performance of Russell “FCTFCTN” Campbell in the match against Philadelphia. FCTFCTN proved why many view him as the second best western tank behind Austin “Muma” Wilmot. Even though it was his first on-stage action, he performed well and shows that even if Muma is sick or struggles with a map, FCTFCTN can pick up the slack and help push the team onto victory.

That is one ELECTRIFYING debut from @FCTFCTN! #OWL2018

San Francisco has a roster full of well-paid young guns. While they have a ton of talent, the team still needs time to gel. Their consistency should see an uptick as they get more time on stage and in scrims together.

San Francisco still has a ton of stiff competition left on their schedule. Until the clear gap in team play and overall strength is closed, they’ll struggle each time they play a top-half opponent.

Florida is pretty good. They also have times they can be really bad. They are the definition of inconsistent. The team has a bunch of talent, but they have failed to put together any sustained string of success.

While being a Mayhem fan may be rough with the lack of wins, there are tons of glimpses of what could still be. There are times where one player or another shows up on stage in the biggest of ways.

A single act of heroism by @MisfitsTviQuE rallied the @FLMayhem in Stage 2 and brought them back against the Fuel.

This is The Turning Point, brought to you by @Sourpatchkids pic.twitter.com/8geaHS2udo
— Overwatch League (@overwatchleague) April 16, 2018

It feels like Dallas has another scandal or bit of juicy drama each week. Their chunk of the power rankings is a bit of a gossip rag. This week is no different.

A few weeks after giving head coach Kyle “KyKy” Souder full control of the dealings of the franchise, the Fuel fired him. In addition, DPS Dong-jun “Rascal” Kim was also released.

This comes after a string of losses, even though there did appear to be progress.

This decision has left the rest of the Fuel reeling. Players such as Hyeon “EFFECT” Hwang have tweeted their discontent. Other players have made it known on their Stream or their Discord.

Dallas needs to do a lot of work to fix their team, and a ton of that work needs to happen off the stage before the on-stage product will see the results.

Shanghai needs to earn a win to climb up this ladder. They still don’t look talented or cooperative enough to pull off a win against an OWL-level team. The difference between the Shanghai Dragons of now and the team from Stage 2 is this team has the potential and the talent to secure a win at some point.

Communication is the biggest area for improvement the Dragons are currently facing. Once the difficulties of the Chinese language and the team’s shotcalls are taken care of, do not be surprised to see Shanghai rip off a couple of wins in a row.

Is Boston for real? We’ll find out. This matchup will have a big impact on the power rankings next week and an even bigger one on the Stage 3 Playoff race.

Can a western team take the top spot in the power rankings next week? This match will tell us. Besides that, the teams should match up very well, and fans get to see the rematch of the Stage 2 Championships.

Another extremely close matchup that will prove whether or not the Valiant are for real. If London loses both matches this week, their skid is completely confirmed and they’ll have to go back to the drawing board. If they fare better, we may see them go back to the spot they’re much more used to.

You can see the rest of the schedule here:

Crootin Department Head | The Armchair All-Americans, LLC
Dylan Schnabel
https://dylanschnabel.contently.com/
[email protected]
I am an author, copy-editor, rancher, sports writer, and father who spends his free time devouring sports statistics in an attempt to be the best armchair general manager my family has ever had the pleasure of ignoring. My wife watches more football than me. Despite that, I still think you care about what I have to say. Reach me at [email protected]
×

Crootin Department Head | The Armchair All-Americans, LLC
Dylan Schnabel
I am an author, copy-editor, rancher, sports writer, and father who spends his free time devouring sports statistics in an attempt to be the best armchair general manager my family has ever had the pleasure of ignoring. My wife watches more football than me. Despite that, I still think you care about what I have to say. Reach me at [email protected]
https://dylanschnabel.contently.com/
[email protected]
Latest Posts CWL Division B Team Heretics and Splyce on top 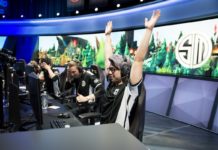 How the Overwatch League’s Spark won our hearts with art