Coach Paul Mainieri spoke with the media on Monday to talk about the upcoming season and roster, giving his insight on what should be another deep run for the purple and gold.

When LSU was eliminated by the eventual champion Oregon State Beavers in the regional, all focus turned to the 2018 MLB Draft and the Tigers lucked out with ace junior pitcher Zack Hess, senior outfielder Antoine Duplantis and junior outfielder Zach Watson all returning to school in the fall.

Not only did those three commit to returning, but Mainieri also had them join him for Team USA along with sophomore slugger Daniel Cabrera. The hype around Cabrera is monumental as he batted .300 with six RBI for Team USA this summer. With that core four intact from last year’s squad, the Tigers will return the veteran presence needed for a long run in the postseason.

The Tigers will also be returning some players from the 2017 season that missed most of or all of the 2018 campaign with injuries. Shorstop Josh Smith, who has battled a chronic back injury, played just nine games this past season.

Smith has seen many different back specialists and is in step four out of five in his rehabilitation according to Mainieri. Smith has yet to swing a bat or field ground balls but the hope is to have him back for the start of fall camp in August.

“Josh is doing great,” Mainieri said. “Our athletic trainer is working very hard with him and Josh told me yesterday that he has experienced zero pain in his back for about three or four weeks now. Obviously having him back is going to be a real key to our team.”

Sophomore pitcher Eric Walker was having one of the strongest pitching campaigns ever posted by an LSU freshman in 2017 and was a major factor in the Tigers advancing to the World Series final against Florida two years ago. Unfortunately, Walker was forced to miss the final few games in Omaha with elbow soreness which turned into the need for Tommy John surgery in the offseason.

That forced Walker to miss the entire 2018 season, but Mainieri said that Walker’s dedication to getting back on the field has resulted in no setbacks in his recovery and will be a “full go” for fall camp.

“All you need to do is spend about two minutes with Eric Walker to see what a mature, intelligent young man he really is,” Mainieri said. “This entire year he has been dedicated to getting himself back healthy. He three three bullpen sessions last week and out pitching coach Alan Dunn said ‘You would’ve never known he had been hurt’ by the way he was throwing.”

Mainieri and his recruiting staff lucked out in the draft with a number of players turning down significant signing bonuses to attend school and chase a seventh championship at LSU.

The pitching staff lacked depth in 2018 and that was an area Mainieri wanted to address and certainly did with incoming freshmen Cole Henry, Jaden Hill, Landon Marceaux, Will Ripoll, Chase Costello and Riggs Threadgill all signing on that will deepen the bullpen.

In addition to pitchers, LSU added three catcher to the mix in junior college transfers Saul Garza and Brock Mathis, with freshman CJ Willis competing as well. Mainieri acknowledged the catcher position was a weakness last season and wants more personality behind the plate.

The Tigers will leadoff the 2019 season on February 15th against UL-Monroe in a four team series that includes Army and Air Force on opening weekend. Mainieri has a history of using opening week as a soldier salute to honor the men and women that fight for the USA.

LSU will also have non conference series with the Texas Longhorns and the University of California before opening up SEC play against Kentucky.

“I have no doubt in my mind that we have a championship caliber team personnel wise,” Mainieri said. “Now it’s up to me and our staff to mold this group of guys into something beautiful and we have a lot of work to do.”

Glen West
[email protected]
Texas A&M Former Student. Huge sports fan who hates stereotypical pink jerseys and the thought that women and sports don\'t mix, Interested in sports banter and complaining about how Dallas sports consistently underachieve at everything? Hit me up on Twitter @shelbae_nichole. Thanks, Gig Em, and God Bless y’all.
× Eagles roll into playoffs on the back of two consecutive ACC series victories. 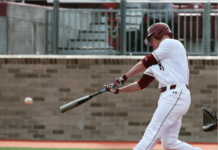 BC wins three of five, but can’t break through in the ACC. BC hearts broken by two walkoff ​losses in sw​​​eep against UNC.