Daniel Bituli is the unquestioned leader of Jeremy Pruitt’s defense. He’s vocal, a great mentor to the younger players, and an all-out tackling machine. The senior linebacker out of Nashville Christian has long been important to this Vols program. If you doubt any of this, go back to the first two games of the season.

We all know what went down those two weeks, but one of the main reasons for what occurred can be linked to Bituli. He was out after a knee procedure a couple of weeks before the season, and in those two games, the Vols were lacking leadership. Sure, Henry To’o To’o is going to be a star during his time on Rocky Top, but he had never played in a college football game at that point. The misalignments and big plays were mainly due to not having Bituli.

Now, look at this past week. This defense didn’t allow Kentucky to score after the first quarter, and Bituli recorded 19 tackles. Yes, you read that right, NINETEEN. Add those into him assisting in stopping Kentucky from 4th and 1 with the game on the line, and I think you’ll start to see the picture.

Too often, we only judge defenders by how often they’re around the ball, or making an acrobatic interception. Bituli shows that there is so much more that goes into leading an SEC defense. His sense for the ball is incredible though, (11th in the SEC in tackles while playing 2 fewer games.) He’s leading a defense that has drastically improved throughout the season, and is becoming one of the better units in the league.

Everyone’s focus is on losing Jauan Jennings and Marquez Callaway after this year, and rightfully so. Jauan is going to go down as one of the most beloved/important Vols ever, and Quez is going to make a big impact on whatever lucky NFL team takes him. But the toughest loss facing next year’s team? Daniel Bituli.

As I have mentioned, Henry T is a stud, and will be for a long time. We also have a couple solid linebackers coming in next year’s class. But, you just can’t replace a guy like Daniel Bituli overnight. The reigning SEC Defensive POTW means so much to this program, and will not be forgotten when the Vols turn the corner. For the future of the Vols defense, we can only hope that someone does half of what he’s done.

I’m just asking for one thing out of Vol Nation. We all know the type of roar that Jauan is going to get on senior night. I was there for Admiral Schofield’s in Thompson-Boling, and expect it to be even more deafening than that. But, when Daniel Bituli’s name is announced, I hope everyone recognizes what he’s meant to this program and gives him the same. I know I certainly will.

Author Details
Dillon Taylor
Content Creator for More Important Issues , The Armchair All-Americans, LLC
I’m from Lynchburg, Tennessee, and have been a Vol Fan all my life. It’s always been a dream of mine to be able to cover Tennessee athletics. Hopefully, I’ll be writing about us having a national championship team soon. In the meantime, it’s always Go Vols!
http://www.armchairallamericans.com
[email protected]
×

Dillon Taylor
Content Creator for More Important Issues , The Armchair All-Americans, LLC
I’m from Lynchburg, Tennessee, and have been a Vol Fan all my life. It’s always been a dream of mine to be able to cover Tennessee athletics. Hopefully, I’ll be writing about us having a national championship team soon. In the meantime, it’s always Go Vols!
http://www.armchairallamericans.com
[email protected]
Latest Posts 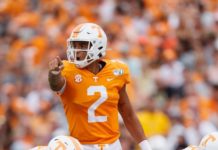