Now that all NFL teams go into summer break after OTA’s and training camp does not start for another month, it’s time to make some early projections for each unit on the Indianapolis Colts roster. Let’s start with the wide receivers:

The second-round pick out of Mississippi is now in his third season with the team and has the most to prove out of any other offensive player. After thriving in his sophomore campaign with the Colts during the 2015 season (catching 64 passes for 744 yards and six TDs), Donte Moncrief found himself a case of the injury bug in 2016, only playing nine games, catching 30 passes for 307 yards and seven touchdowns. Even though the Mississippi native saw an increase in touchdowns during the 2016 season, he also saw nearly half the targets and receptions during his nine games on the field.

Reports out of OTA’s and minicamp this offseason have been optimistic. Moncrief is reportedly looking like he will turn the corner this year and become to reliable number two receiver this team needs. Hopefully this will be Moncrief’s breakout season; 1,000 yards should be on the horizon for him.

This wide receiver has been the most disappointing turnout thus far. Being a first-round draft pick, Phillip Dorsett was supposed to be a reliable number three receiver in an offense that sprays its receivers with targets. The result has been far but that; Dorsett has accumulated 754 yards and three touchdowns on 51 receptions during his first two years in the NFL. With Moncrief sidelined for seven games last season Dorsett was given the opportunity to showcase his ability as a starter opposite of Hilton. During the eight games that Moncrief was not available, Dorsett mustered up 22 catches for 235 yards and two touchdowns, which is certainly not taking advantage of an opportunity.

With the addition of Kamar Aiken in the offseason, Dorsett is in a do-or-die situation with the Colts. And if he cannot perform at a higher level during the 2017 season, he may be looking for a new home in 2018. The Colts are well known for developing talent at the receiver position, having guys like Marvin Harrison, Reggie Wayne, and now T.Y. Hilton performing at consistently high levels throughout their careers, and Hilton’s NFL career is far from over. Dorsett is no doubt a work in progress, but history shows that things should go in a positive direction for Dorsett from here on-out.

One of the smartest moves that GM Chris Ballard made this offseason was signing wide receiver Kamar Aiken to a one-year contract. After nearly breaking 1,000 yards in 2015 with the Baltimore Ravens, Aiken dropped back down on the depth chart in 2016 when the Ravens added Mike Wallace to the roster and had a healthy Steve Smith Sr. in the lineup. The talent is still their in Aiken, but opportunities were few and far between in 2016 for the sixth year pro. Now on the Colts’ roster, Aiken will fight for the number three spot with former first rounder Phillip Dorsett which will create surefire competition at the position.

Based on the depth chart from Ourlads.com, Aiken is the second tallest receiver on the team (6’2”) right behind less talented-receiver Chris Briggs (6’5”) who was a tight end in college. Expect to see Aiken a lot in red zone situations; Chuck Pagano will take advantage of his size against smaller cornerbacks.

This man has little to nothing to prove. Do I need to explain? Ok, I will anyways.

Hilton is looking to post his fifth straight 1,000 yard season in 2017, after grabbing 91 receptions for 1,400 yards and six touchdowns in 2016. He lead the entire league in receiving yards and truly showed his value to the Colts’ organization. He seems to be the one “sure thing” that the team can rely on every week, even more so than players like Andrew Luck and Frank Gore. Hilton shows everyone that you don’t need height to be an elite receiver in the NFL, standing at 5’9”. Guys like Hilton and Antonio Brown are making teams think twice about the importance of ball skills and speed in a receiver compared to other factors that were once deemed important.

If there is one position that does not need to be worried about on the Colts’ roster, barring injury, it is the number one receiver spot. Expect another top-5 NFL receiver performance from Hilton in 2017.

Devon Clements
[email protected]
Having just recently graduated from the University of Massachusetts in Dartmouth, I am now grinding it out to become the best. I am the Celtics Department Head for Armchair, while also contributing to The Standard Times newspaper in New Bedford, MA. I’m not trying to be the small town journalist who can’t make ends meet. I want to be the best, and I won’t stop until I get there. I want to be a household name in the sports community.
×

Devon Clements
Having just recently graduated from the University of Massachusetts in Dartmouth, I am now grinding it out to become the best. I am the Celtics Department Head for Armchair, while also contributing to The Standard Times newspaper in New Bedford, MA. I’m not trying to be the small town journalist who can’t make ends meet. I want to be the best, and I won’t stop until I get there. I want to be a household name in the sports community.
[email protected]
Latest Posts 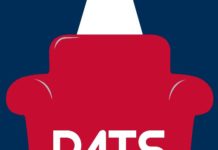 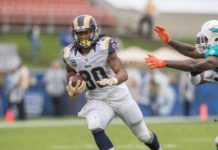 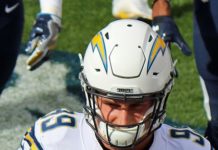 The AFC West has become a 3-team race