Well, here we are. Still reeling after both the Calgary Flames and Vancouver Canucks game? Now it’s time to pour some salt into that open wound and reflect on what went wrong. Spoiler: it’s the third period. In the final period of play in their last two games, the Colorado Avalanche haven given up seven goals. Four against Calgary, and two (one in the final 36 seconds) of the Vancouver game. The good news? The Avalanche snagged a point even when losing in OT to the Canucks.

MOTHER OF THIRD PERIOD NUCLEAR MELTDOWNS… Okay, so. First two periods: The Avalanche looked very solid and composed. The secondary scoring that the Avalanche have needed to elevate their game was on full display again as Vladislav Kamenev opened the scoring for Colorado just three minutes into the second period. A shorthanded goal, it was Kamenev’s first ever NHL goal. Less than two minutes later, Sheldon Dries scored his first ever NHL goal after being called up from the Avs AHL affiliate Colorado Eagles. Colin Wilson and Carl Soderberg also netted a goal to put the Avs ahead 4-1 after two. Then the third period happened. Elias Lindholm scored on the power play just 47 seconds in and the downward spiral was on. Miscommunication plagued the Avalanche and coupled with only 26 shots on net the entire game, there was no real answer to the momentum the Flames had built up in the period. Mark Giordano gave the Flames the lead with a little over seven minutes to play and Michael Frolik sealed the deal a minute and change later. Landeskog would bring the Avalanche back to within one with a minute left, but the Avs dropped the game 6-5.

The good news was that the secondary scoring was apparent yet again. Especially in a game where the top line was shut down pretty effectively. And with two players scoring their first career goals, hopefully Kamenev and Dries will now be able to take the momentum and run.

Another game, another heartbreak. This game was a shootout. Fun to watch if you like scoring, terrifying if you like goaltending and strong defense. For the Avalanche, it seemed like everyone was able to get in on the scoring. Nathan MacKinnon netted two goals and Mikko Rantanen got two assists on the goals. Dries scored his second goal in just as many days, and the D-men of Ian Cole and Nikita Zadorov got in the scoring. MacKinnon’s second goal gave the Avs a 6-5 lead with a little less than two minutes to go in the game, but the Canucks stood strong and equalized with 36 seconds to go with rookie phenom Elias Pettersson’s second goal of the game. Derrick Pouliot finished the Avalanche off with 22 seconds to go in OT.

The Avalanche came out of the brief Canadian road trip with a point out of a possible four. The team knows that they should have won all four points but will now put the past behind them as they prepare to take on the Nashville Predators on Wednesday. It will be the first time all year that the Avalanche wear their Colorado Rockies inspired dark blue alternates. The team will then travel again on another short Canadian trip. 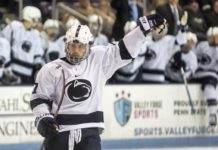 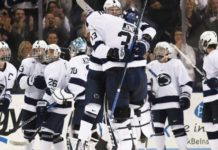